The GettingLost.ca Four Mountains Task was designed to be a reliable and repeatable measure of an individual's perspective taking ability. For each trial of this task, participants view a landscape populated with four 'mountains' in the foreground. Participants have 8 seconds to memorize this scene. After a 2 second delay, participants are asked to select the landscape with the same mountain shapes and arrangement as the studied lanscape from a set of four options. Only one option shares the same topography as the memorized scene.

In each trial of this test you will see a picture of a mountain landscape which you should study carefully. That picture will be followed by four similar landscapes seen from different points of view and under different conditions of lighting or weather. One of the four pictures shows exactly the same place as in the previous picture, although it will be shown from a slightly different viewpoint and different environmental conditions. Your task is to identify which of the four pictures shows the same place as the one you had just seen. Focus on the layout of the scene, specifically the shape and arrangement of the mountains in the foreground.

The foreground mountains are generated by individually selecting their magnitude and phase relative the center of the environment, as well as their height, width, and slope shape. This is overlaid on three different spatial frequencies of perlin noise, and textures are applied based on the height and normal angle of the terrain, alongside two 'climate' variables.

Foils are generated by potentially altering the magnitude, phase, height, width, and slope of the individual mountains, while all options in the response set have have the same climate variables, camera position, and sun position, which have been changed relative to the memorized landscape. The camera position always rotates forty degrees about the center of the environment from the memorized position. 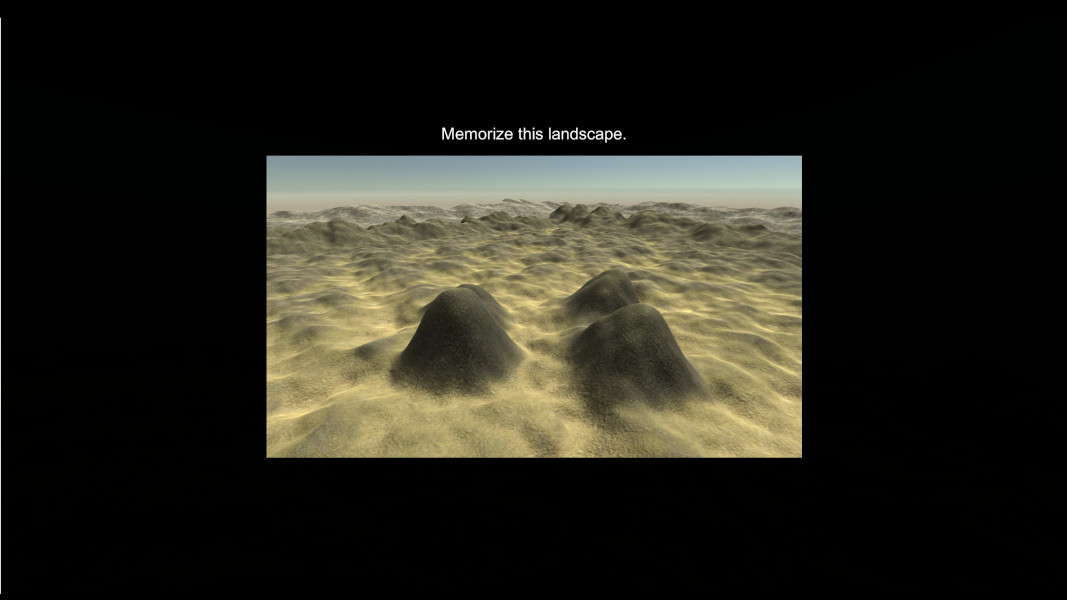 Sample stimulus to be memorized. 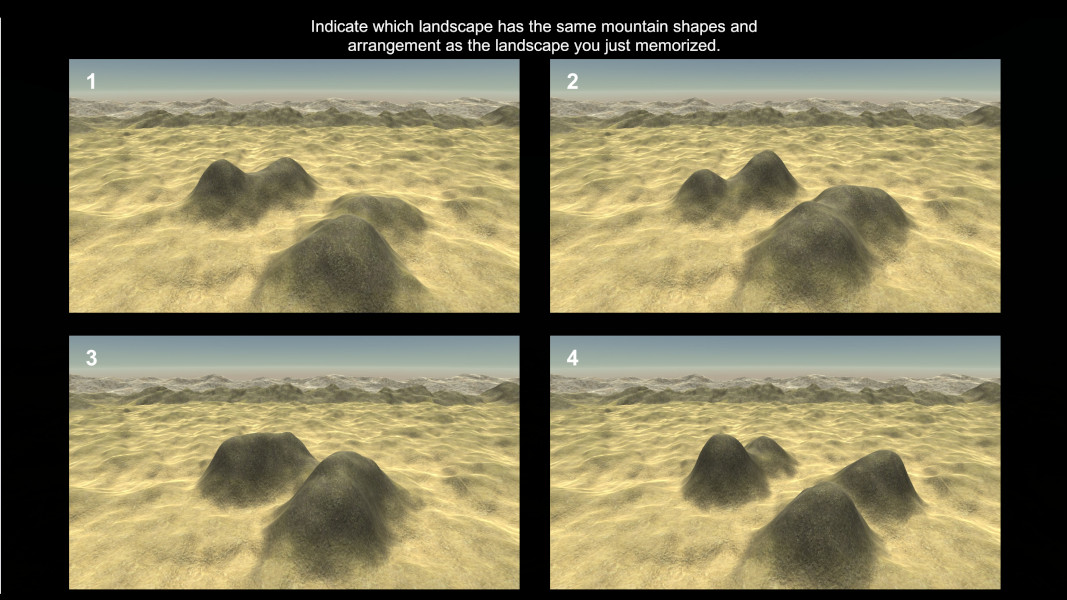 Sample response set. The target is option 4, options 1-3 are foils.

Default implementation has 20 trials, each with:

The original test also makes use of categorically-defined foils: one foil ('configural') has the same mountain positions but two swapped mountain identities, another ('elemental') has the same layout but one mountain was replaced with a novel shape, and the final foil ('spatial') has the mountains in approximately the correct 'order' but the actual positions are not the same as the target landscape. This foil set provides the possibiltiy to acquire additional information from incorrect responses based on the foil selected, but also allows strategic guessing. For instance, you could quickly eliminate the 'elemental' foil (by looking for the odd mountain out from the entire set), and eliminate the 'Spatial' foil as it will have unique mountain positions relative to the set. After identifying the 'spatial' foil, you then know the correct layout order, so the correct response is picked from the remaining two with the same approximate order as the 'spatial' foil. While this is likely not an issue for the target population for the original task, for more general assessment we felt that this categorically-defined foil set would be more of a liability than an asset. The GettingLost.ca version produces random foils procedurally by a set range of variation about the five properties used to generate the mountain stimuli. The default implementation on GettingLost.ca uses a cached set of 100 stimuli, but can also generate an effectively limitless number of stimuli on demand.

The current version includes three researcher-defineable parameters: the number of trials in a run, and the current run number, and an option to generate stimuli instead of using cached versions. Specifying the run number ensures that participants who perform the task multiple times do not see the same stimuli twice. If the four mountains task is set to generate new stimuli, specifying the run number will have no effect.

You can download image assets to assist you in creating figures of the GettingLost.ca Four Mountains Task: four-mountains-sample-images.zip, 4.1 MB. These files are released under a CC BY 4.0 license.