The Cognitive Map Task assesses an individual's ability to generate a mental representation of a simple, city-like virtual environment. The environment includes four distinct landmarks embedded in a 5-by-5 grid of identical buildings. For each trial of this task, participants visit each distinct landmark during a passive, first-person movement through the environment. Participants then will be asked to indicate the locations of the four unique landmarks on a top-down view of the environment. If the landmarks are placed correctly the task will end, otherwise, another trial will begin. The virtual city remains the same across trials, but the path taken from trial to trial will change. If the participant does not provide the correct environmental layout after the 12th trial, the task ends.

In each trial of this task you will be shown a video of a person moving in a virtual neighbourhood with four unique landmarks, shown below. In each video clip, the video will visit all four landmarks. The virtual neighbourhood stays the same across all video clips, and the four landmarks are always located in the same places. Your task is to create a mental representation of locations of the landmarks in the environment by watching each video clip carefully.

At the end of each video, you will be presented with a top-down view of the virtual neighbourhood in which you will be required to report the locations of the four unique landmarks. If you correctly report their locations, the task will end. If you are incorrect, another trial will begin with another video of the exact same neighbourhood. There will be a maximum of 12 trials, after which the task will conclude, regardless if you have provided the correct layout or not. 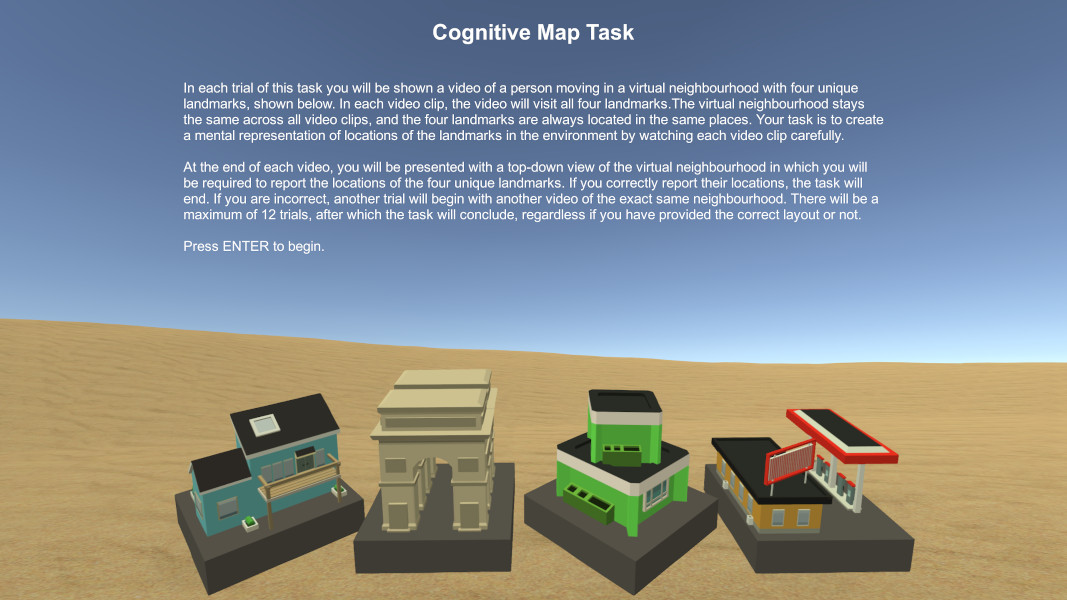 Sample instructions presented to the participant.

The randomized environmental layout (drawn from 4 possible unique layouts), 4-landmark set (drawn from 16 landmarks arranged in 4 4-landmark sets), landmark permutation of the 24 possible for each layout, neighbourhood colour (drawn from 4 possible colours), and starting path of the 3 possible for each layout are selected at the beginning of the task. This includes enough landmarks and layouts to accomodate 4 runs of the task within each participants without repeating any changeable features of the environment.

Sample image from within the virtual environment. 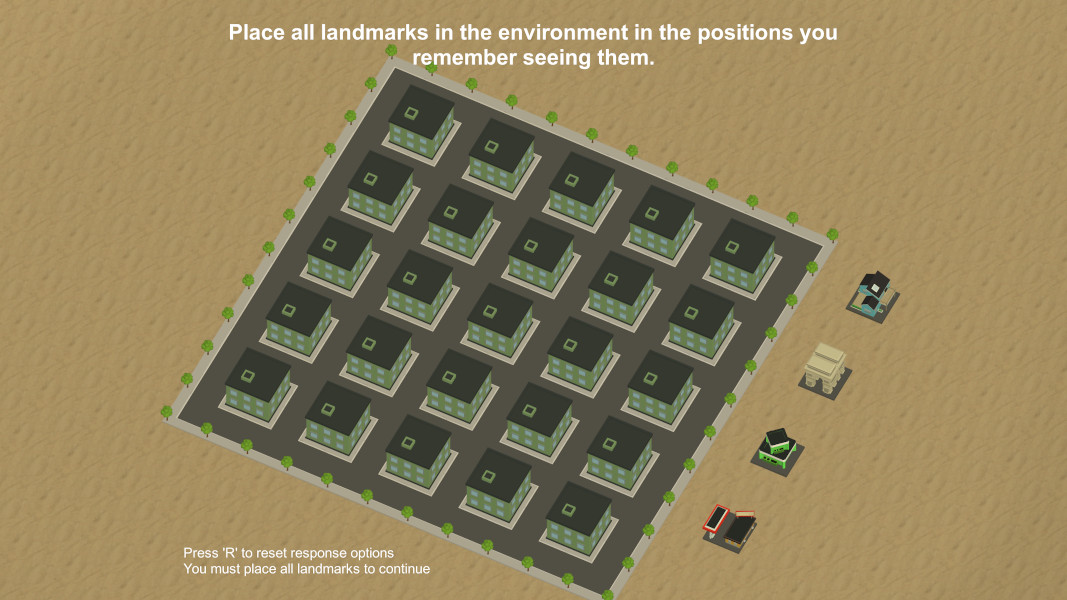 Response screen shown to the participant.

Default implementation has a maximum of 12 trials, each with:

The current, 'generation-2 Cognitive Map Task' is a modernized version of older tasks utilized in our lab. The original Cognitive Map Test (i.e. 'generation 0'; utilized in Iaria et al., 2007) included a single environment with 6 unique landmarks, and distinct 'learning' and 'retrieval' phases, each timed and with active navigation. The generation-0 version was never made available on gettinglost.ca.

The subsequent 'generation-1 Cognitive Map Test' (utilized in Arnold et al., 2013) was very similar to the present iteration of the task, with four unique landmarks in a 5-by-5 rectangular city grid, passive movement, and a drag-and-drop response phase. The generation-1 test ran to a maximum of 20 trials, and had two alternate versions, with one version regularly used and the correct layout spoiled in multiple publications. The generation-1 test was deployed on gettinglost.ca and ran in-browser using Flash, an old plugin that is no longer widely supported. While the generation-1 was the most ubiquitous, we no longer recommend using this task, due to the technical compatability issues and the task being spoiled.

The current, generation-2, Cognitive Map Task version is shorter and easier than the generation-1 Cognitive Map Test, and is best utilized in populations where the Spatial Configuration Task would be too challenging and therefore not sensitive to invididual variability. 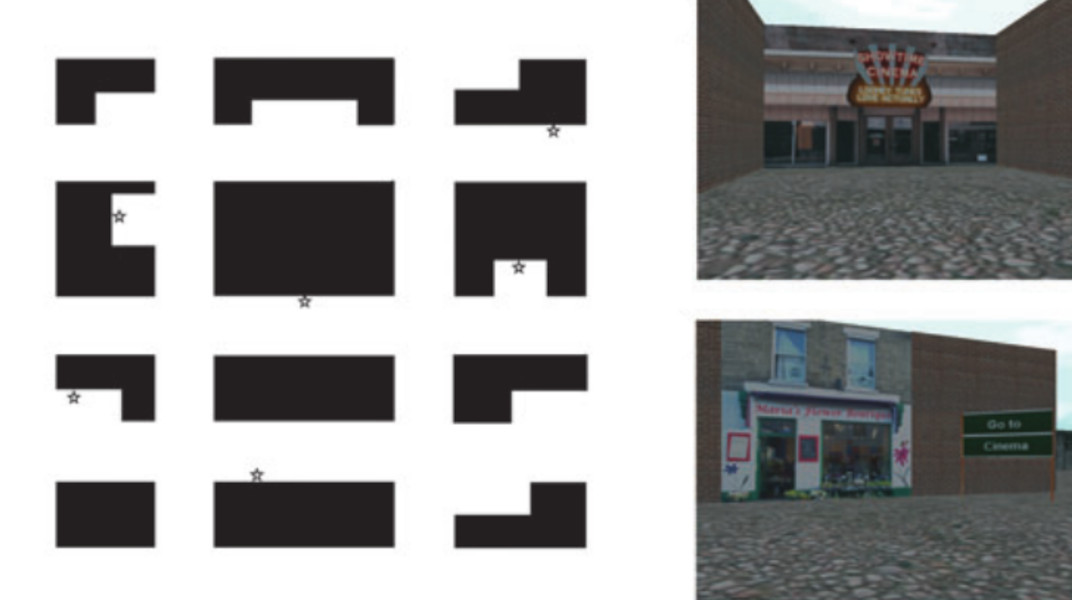 The run-to-run randomization carryover uses the participant's identifier as a randomization seed, so as long as the participant is correctly identified, the administrator can pass a run number of 1 through 4 (e.g. Cognitive Map Task:Run 4) and it will be a novel layout, set of landmarks, and neighbourhood building colour for that participant. Alternatively, each of the sub-parameters can be set specifically (not recommended):

The passive movement translation and rotation speed can also be modified by passing speedpercent. For example, 'Cognitive Map Task:speedpercent 120' would result in the movement being about 20% faster).

You can download image assets to assist you in creating figures of the Cognitive Map Task: cognitive-map-sample-images.zip, 7.1 MB. These files are released under a CC BY 4.0 license.